Rep. Joaquin Castro, D-Texas, chair of a House subcommittee, is investigating whether Secretary of State Mike Pompeo violated the Hatch Act by speaking at the Republican National convention during a taxpayer-funded trip to Jerusalem. (Aug. 26)

WASHINGTON – Secretary of State Mike Pompeo said his controversial speech to the Republican National Convention was “lawful” and had been reviewed by the State Department.

Pompeo addressed the GOP convention in a message he recorded from Israel, while he was on a diplomatic mission to the Middle East.

The move broke longstanding diplomatic protocol and perhaps the State Department’s own policy on engaging in partisan political activity. Previous secretaries of state have eschewed such overtly political activities.

“The State Department reviewed this. It was lawful,” Pompeo told reporters during a news conference Wednesday. “And I personally felt it was important that the world hear the message of what this administration has accomplished.” 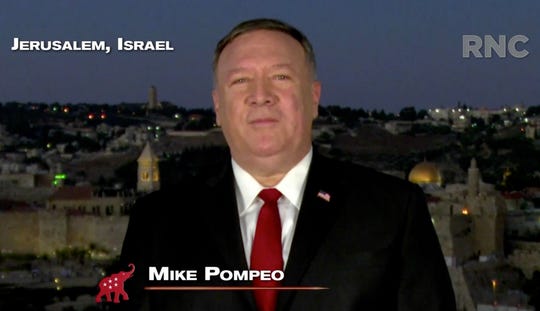 The memo adds: “Senate-confirmed Presidential appointees may not even attend a political party convention or convention-related event.”

Pompeo argued he was addressing the convention “in my personal capacity,” even though he used his speech to tout President Donald Trump’s foreign policy and did so while on official U.S. government-funded travel.

Pompeo did not say who at the State Department reviewed his decision or what the conclusion of that review was.

Last week, Rep. Joaquin Castro, a top Democrat on the House Foreign Affairs Committee, opened a probe into Pompeo’s decision, saying he has “a gross disregard” for ethics rules and “a blatant willingness to violate federal law for political gain.”

Other individuals and outside groups have also filed complaints with federal ethics officials, seeking investigations into whether Pompeo’s speech was a violation of the Hatch Act, which bars federal employees from engaging in certain partisan political conduct. 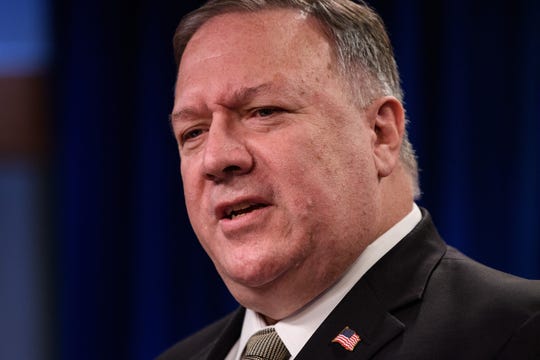 US Secretary of State Mike Pompeo speaks during his weekly briefing at the State Department in Washington, DC, on September 2, 2020. (Photo: NICHOLAS KAMM, POOL/AFP via Getty Images)

The chairman of the House Foreign Affairs Committee, Rep. Eliot Engel, announced last week his committee would move to hold Pompeo in contempt of Congress, alleging an “unprecedented record of obstruction” and noting Pompeo’s refusal to comply with the committee’s subpoenas.

Engel said State Department officials told him they would only turn over the requested documents if the committee agreed to open a probe into Hunter Biden’s dealings in Ukraine. Democrats say that is an effort to “smear” former Vice President Joe Biden, Trump’s rival in the 2020 election.

“In other words, Pompeo will give the committee what we were seeking if we join in a smear of the President’s political rival,” Engel said.

Pompeo did not respond to a question about the contempt resolution during his Wednesday news conference.

An Election Doesn’t Have to Tear Us Apart

Egypt Denied an Oxygen Failure Killed Covid Patients. We Found That It Did.

How ‘Feels Good Man,’ a PBS film about Pepe the Frog, speaks powerfully to this moment in divisive American politics

Can You Recognize These Former Child Stars As Adults?

‘Inshallah’: The Perfect Phrase for 2020

Extremists Around The World Draw Inspiration From DC Insurrection

As a mob stormed the US Capitol last week, far-right extremists, white supremaci…

These Photos Show What The #EndSARS Movement Looked Like