“Cobra Kai” is kicking off its Netflix journey.

The Emmy-nominated series debuted on YouTube Red in 2018. Its first two seasons arrived on Netflix on Friday, with a third season expected to arrive in 2021.

Director John G. Avildsen’s Oscar-nominated classic 1984 film “The Karate Kid” followed the story of New Jersey kid Daniel LaRusso, played by Ralph Macchio, who is transplanted to California and learns to use martial arts in order to stand up to the bullies from the Cobra Kai karate dojo — principally Johnny Lawrence, played by William Zabka.

“The beauty of the ‘Karate Kid’ film and why it stood the test of time is that he had no business winning anything,” Macchio told Asbury Park Press, a part of the USA TODAY Network in 2017. “He was the every kid next door just like ‘Rocky’ (1976) was the every guy down the street or Jack Lemmon in ‘Save the Tiger’ (1973).

Ralph Macchio in a scene from the first season of “Cobra Kai,” now streaming on Netflix. (Photo: Courtesy of Jace Downs/Sony Pictures Television)

Over nearly 40 years the tale has evolved across three sequel films, a remake and a streaming successor series. In each, the players of “The Karate Kid” have adapted to new environments and honed their skills, always mindful of legacy and tradition.

The same can be said for “Cobra Kai,” the follow-up series that’s brought the franchise into the streaming era.

“Cobra Kai” picks up in present day, with Daniel riding high as a successful car dealer and family man. Meanwhile, Johnny is down on his luck, stuck in the past and hoping to revive his old dojo as he’s mentally and emotionally trapped by the toxic lessons of his former sensei John Kreese (played by Martin Kove). 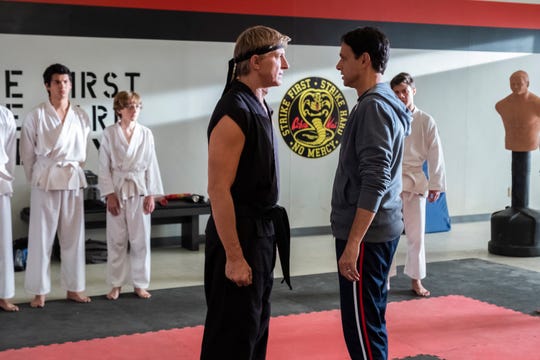 Macchio and Zabka return as Daniel and Johnny, respectively, and also serve as co-executive producers on “Cobra Kai.”

The Sony Pictures Television series is written and executive produced by Josh Heald, Jon Hurwitz and Hayden Schlossberg. Heald is the writer of the “Hot Tub Time Machine” franchise, while Hurwitz and Schlossberg created the successful “Harold and Kumar” series.

“The really rewarding thing for us when setting up the show and continuing to write the show is that a lot of the themes in that movie are just very universal in terms of bullying, in terms of personal connection, coming of age, overcoming personal obstacles, finding mentorship where you least expect to find it,” said Heald. “And all of those transformative and big kind of moments in your life were as true and as poignant in 1984 as they are today, so it never felt like a dated property to us.”

“Cobra Kai” makes for compelling viewing as it strikes a balance between affection for ‘The Karate Kid’ and a willingness to examine the perspective from which Avildsen and company told their crowd-pleasing underdog story. Pointedly, the series opens with the first film’s climactic karate tournament, this time asking you to consider how Johnny felt after Daniel delivered a devastating crane kick to his face.

“While staying 100 percent true to the (franchise), we liked the idea of looking back and realizing, ‘You know what? We were only following one perspective,’ ” said Schlossberg. “And maybe, had we been following Johnny’s perspective, we would have felt differently at the end of the tournament.

“And those themes are what excite us. We’re taking advantage of the fact that our format is a series as opposed to a film, where we can play with different perspectives. And if you’ve watched ‘The Karate Kid,’ it really provides that opportunity to … reflect on your own life and how things have changed, but also look back on that movie in a fun way.” 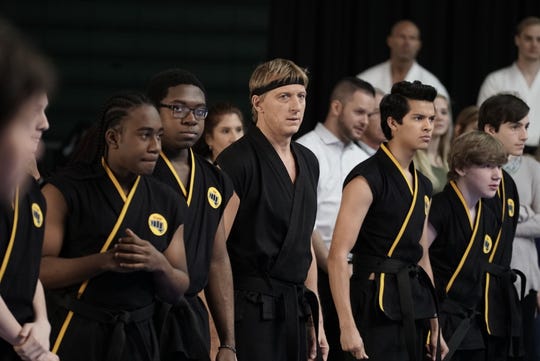 That, beyond the chance to work with original stars like Macchio and get to make knowing call-backs, was why “Cobra Kai” was made.

“It was looking back at our own childhoods and our own pasts and reflecting on how we change as we get older,” said Schlossberg.

The heart of “Cobra Kai” is found in Johnny and Daniel’s mentoring relationships a new generation of characters, including Daniel and Johnny’s children.

This modern perspective affords Heald, Hurwitz and Schlossberg the opportunity to deconstruct Avildsen’s classic 1980s American archetypes, asking who Daniel and Johnny would be as adults in modern America. 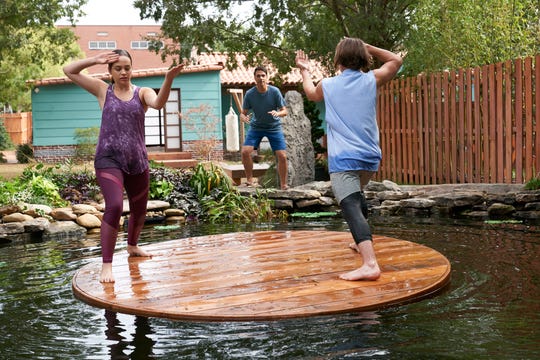 Mary Mouser, from left, Ralph Macchio and Tanner Buchanan in a scene from the second season of “Cobra Kai,” now streaming on Netflix. (Photo: Courtesy of Bob MahoneySony Pictures Television)

“We’re in a time where socially, I think, and politically people are examining the world in a much deeper way and the rights and wrongs of the past and the perspectives of the past,” said Hurwitz. “I think whether it’s the Internet age or whatever, the social media age, where everyone’s opinions are out there, everything is being explored and dissected from a wide array of perspectives.

“So why not analyze whatever film properties we all know and love and look at them from every angle and see if they were pure or if there were things underneath the surface that were worthwhile to unpack?”

Judas And The Black Messiah Trailer

Will Pfizer’s Vaccine Be Ready in October? Here’s Why That’s Unlikely.

In media appearances and talks with investors, Pfizer’s chief executive nearly always mentions a word that is so politically perilous,

Pandemic Is Far From Over, Experts Say, Despite Trump Allies’ Claims

A Theory About Conspiracy Theories

The Woman Taking Over TikTok at the Toughest Time

19 Movie Scenes That Were So Smart, I Can't Believe Someone Thought Of Them

You Have To See Snoop Dogg Calling Out The “Sorry-Ass, F*cking Men’s [Soccer] Team” In Instagram Rant About Equal Pay

If you haven’t already watched Phineas and Ferb, now’s your chance. …

CLOSE 2020 has given us some quality television like the “Jeopardy!”…