The first night of “Dancing with the Stars” Season 29 was full of tiger stripes and claws. Carole Baskin received the lowest score of the night.

It was like a disco ball light switched on in Week 2 of “Dancing With the Stars.” After a flat opening night last week that left all kinds of questions, this dance machine reality show started to groove.

Sure they promoted Carole Baskin’s tearful TV breakdown in previews. But did anyone expect the “Tiger King” star to actually move in a way resembling dance on the floor? And still Baskin faced severe early exit drama.

There was delicious spectacle, literally touch-and-go “Bachelorette” injury menace, unleashed chest hair, an actual mirror ball jacket. New host Tyra Banks was sharper, as was the canned audience sound, and the cast is starting to pop with personality.

And there was the first elimination that frankly got my butterflies churning.Yes, it’s still OK to miss host Tom Bergeron (forever Tom!), but “DWTS” was fun, again.

Here are key points from the show.

Carole Baskin on her ‘DWTS’ breakdown: ‘I’m powerless to change how much the lies have hurt’ my family 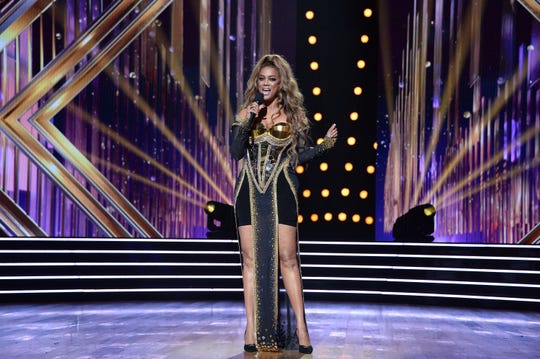 ‘The Bachelorette’ ankle injury update was fantastic, even after it got stupid

Years from now when people ask, where were you when “Bachelorette” star Kaitlyn Bristowe hurt her ankle, you can say, “watching the many ‘DWTS’ injury updates.” The first camera shot of Bristowe having the mysterious ankle injury attended to, with grave faces, was sublime. The next three updates were good. Having her pro partner, Artem Chigvintsev, come in person to update Banks center stage like some medieval messenger was unintentionally hilarious.

Bristowe did eventually dance and nailed a graceful foxtrot to “I Hope You Dance” by Lee Ann Womack, with scores that tied her for first place.

Was it massive over-hype or was Bristowe stoic in not explaining? She did mention she took cortisone for the pain. Might be legit. Historians will debate. Her publicist will spin.

But the verdict on “DWTS” milking the drama was clear: Bravo. But take it easy on that udder. 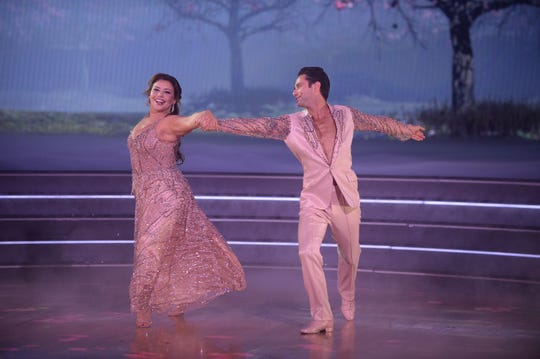 “One Day At a Time” actress Justina Machado is emerging as a powerful “DWTS” force and one for good. More than dancing her rumba with Sasha Farber to “When You Believe” by Whitney Houston and Mariah Carey, Machado soared with a smile that could make you forget there’s a global pandemic. There were cherry blossom trees on the stage that shed petals. It was so magical that even the judges got swept up, placing the duo tied for the top spot on the leaderboard with their scores.

“I love watching you,” judge Bruno Tonioli said, speaking for America. “You dance from the heart.” 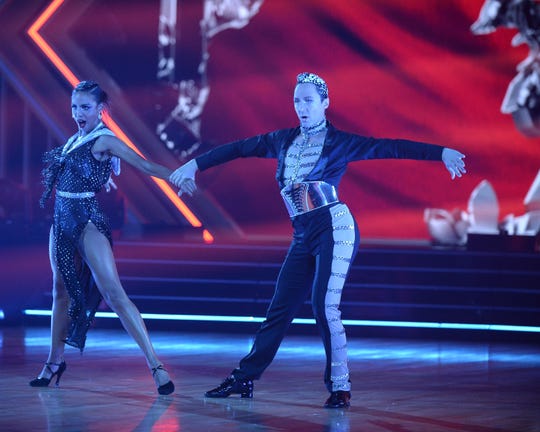 Olympic figure skater Weir is entirely at home at “DWTS,” as shown by his proud unfurling of his new alter ego: Johnny Gaga. Who knew his mother and Lady Gaga are longtime friends? His tango with pro Britt Stewart to Gaga’s “Poker Face,” which started with the two lying on the ground, and that fantastic Gaga-inspired outfit will live on, even if he was faulted for some technical dance issues. The force is strong.

Judge Bruno Tonioli is in playoff form, and earning 10s for beloved bombast

Tonioli was off his game last week, and it showed. Rusty? Missing straight-man judge Len Goodman (still stuck in England)? Both, most likely. But Tonioli and his brilliant pink jacket were in rare form Tuesday night. It’s a judging dance involving crisp instruction, real criticism and then delicious, over-the-top blather from his usual standing position. We love you right back, Bruno.

Nelly had special ‘Dancing With the Stars’ kicks made for moving

Rapper Nelly gave a solid effort last week, pulling off a backflip at 45. He was criticized for wearing sneakers on the dance floor, however. Just to give an idea of his “DWTS” commitment, Nelly had special shoes designed by a foot surgeon – sneaker in style, dance shoes in form.

His cha cha to “Let’s Grove” by Earth, Wind & Fire with partner Daniella Karagach was entirely fun, with his effortless moves. Still needs technical work with scores putting him in the middle. But strong potential. And he has the kicks. 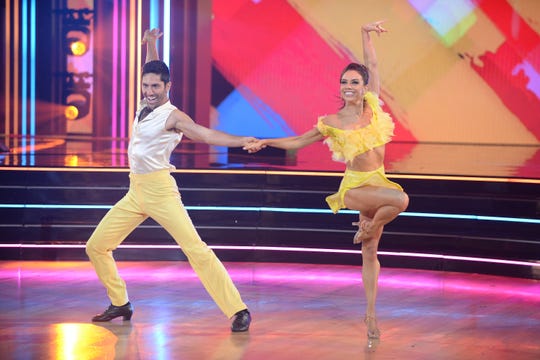 “Catfish” star Shulman is started to turn heads with his shock dance moves for the second week in a row. Tuesday’s cha cha to “Dynamite” by BTS with pro Jenna Johnson had gyrations that were mind-blowing.

But Shulman’s most fun reveal was the pure abundance of chest hair springing from his lowcut dance shirt. “By the beard of Zeus, that’s a lot of chest hair,” marveled judge Derek Hough.

Tonioli praised the dance and said “a bit of manscaping would do.” Even Banks jumped in saying, “If we didn’t have to be socially distant, I would be feeling it right now.” Good times.

Backstreet Boys singer McLean showed the consummate pro moves with Cheryl Burke, dancing a showman-worthy foxtrot to “Ain’t That a Kick in the Head” by Dean Martin. But his song and dance dedication to his wife, Rochelle, and the couple’s pre-dance telling of their love story, was pure modern romance. Fun fact: Rochelle originally turned the Backstreet Boy for a date, but he persisted. McLean even got weepy talking about his love for her after getting his dance scores. “True love is out there, I found you,” he shouted. We felt it.

Chrishell Stause got emotional about her past

In a pre-taped clip, the “Selling Sunset” star gave pro partner Gleb some insight into her life growing up, including her and her family’s week of homelessness.

“We were basically squatters in an abandoned schoolhouse, we didn’t have running water. The mattress smelled like mildew,” she explained.

She added, “I wanted to give you an idea of where I’m from. It’s why I’m so grateful to be here and why I’m going to try as hard as I can.” 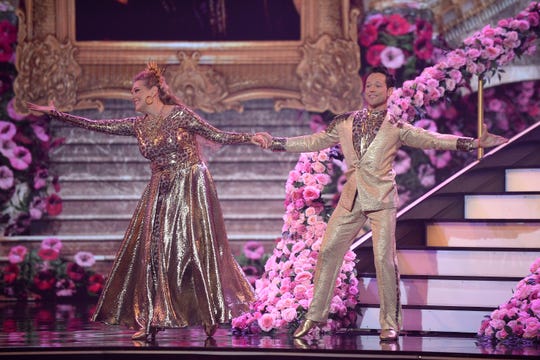 Carole Baskin and Pasha Pashkov perform on the show’s most expensive set ever on “Dancing With the Stars.” (Photo: Eric McCandless, ABC)

Carole Baskin poured out her heart and danced

Baskin did get tearful talking about the strain of dealing with “Tiger King” fallout, with gentle questioning by pro partner Pasha Pashkov, who was crying, too. It always helps to have a Pasha to cry on. Mostly Baskin was poignant discussing her daughter dealing with the aftermath. The show might help that, Baskin said through near sobs. “So she can tell her friends, ‘This is who my mom is, kind of. She doesn’t really dance. But she can learn to dance.’ ” Emotional spin, sure. But effective.

Then Baskin actually seemed to move, with a dance that suited her, a Viennese waltz to “What’s New Pussycat” by Tom Jones. She wore a gold leopard-print dress and a wild gold crown and actually hit some steps on a budget-busting, rose-filled stage with a giant gold frame featuring a cat painting.

“There is hope. It wasn’t perfect, but there’s hope,” said Tonioli. 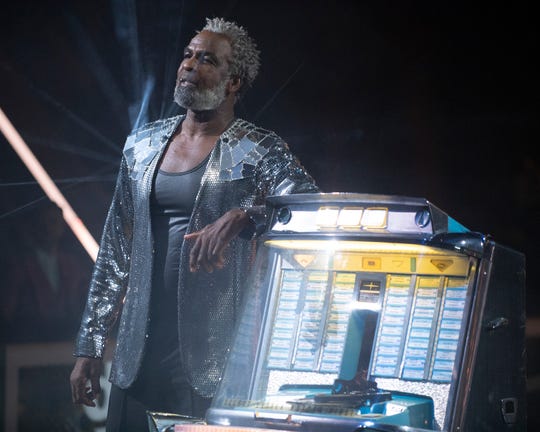 Still it wasn’t enough to save possible elimination …

Despite Baskin’s improvement, her low scores put her into elimination jeopardy along with fellow dancer and pro basketball player Charles Oakley.

Oakley was showing better moves this week. He’s lowkey, but his shine was starting to surface. The one-time Chicago Bull and star of ESPN’s “The Last Dance” actually rocked an audacious mirror ball jacket during his cha cha to “Never. Too Much” by Luther Vandross with partner Emma Slater. That jacket was stupendous.

The final decision was left to the judges, who were split as to which celebrity to save. In the end – ABC executives were no doubt pleased to note – the audience-drawing Baskin was spared by the deciding vote from Hough.

Oakley departed too soon, before the baller could really start balling.

Weird Movie Scenes That Should Have Been Cut

Let’s Talk About Constipation During Pregnancy

Constipation may be two to three times more common during and after pregnancy, Finnish researchers report. The scientists studied 877

Why False Positives Merit Concern, Too

Voting in a Covid Pandemic: Wear a Mask and Bring Your Own Pens

Anne Hathaway Was Pregnant While Filming The Witches

All About Ant Group, the Next Big Tech I.P.O.

What We Learned From Week 7 of the NFL Season

$1 Million Homes for Sale in California

Literary Inspiration for a Sad Covid Halloween at Home

Postcard-Perfect Scenes, Constructed From Memory and Scraps of Paper

Some see irony in virus’ impact on Mayflower commemoration

Can You Score At Least 11/13 On This "American Horror Story" Quiz?

Find out just how much you slay. 🔪 View Entire Post › Sahred From Source …

“The writers squandered a perfect opportunity with Katara and Zuko.”…