2020 has given us some quality television like the “Jeopardy!” tournament that pitted its top three players against each other.

In 2006, Bob Woodruff was severely injured by a roadside bomb while reporting on the war in Iraq for ABC. He suffered life-threatening injuries as shrapnel and other debris from the explosion lodged in his brain, causing him to spend 36 days in a medically-induced coma.

“It’s been a long recovery; it’s been more than 14 years now and for me and my family there’s always been hope,” said Woodruff, a longtime Rye resident who raised four children in the village with his wife, author Lee Woodruff.

What never waned was Woodruff’s interest in exploring countries around the globe. He also wanted his kids not to grow up fearful just because of what happened to him.

Woodruff has combined both goals by hosting a new National Geographic series with his 29-year-old son, Mack.

The father-son duo are featured on “Rogue Trip, a series that is streaming on Disney+. Over the course of the six-part series, the duo travels to six countries including Colombia, Papua New Guinea, Ethiopia, Pakistan, Lebanon and the Ukraine. 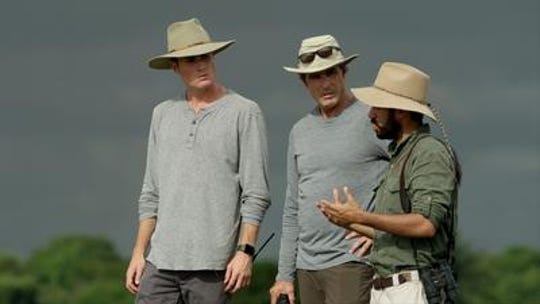 Bob Woodruff and his son Mack in Colombia. The duo are featured in a Nat Geo series called “Rogue Trips.” (Photo: National Geographic)

“Rogue Trip,” which premiered two weeks ago, was shot over four months starting in July 2019.

After years of covering wars and environmental issues for ABC, Woodruff said the series offered him a chance to change peoples’ perspective on regions or countries not generally found on a tourist’s list.

“Nothing ever gets back to the way it was before. And sometimes things can be better than they were before,” said Woodruff. “Life can get better and countries that I reported on can do the same.” 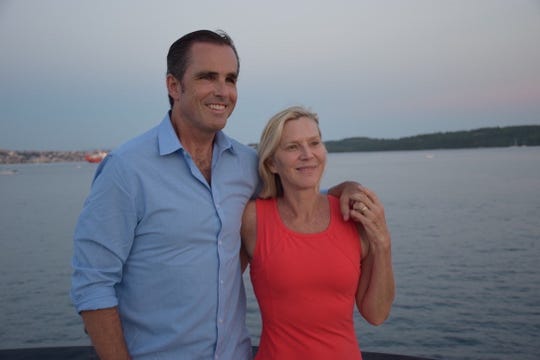 For Mack, a professional photographer and an aspiring on-camera journalist, the series offered a chance to learn from the best.

“The ins and outs of interviewing someone and how to ask the right questions and to be an active listener and all those skills were developed as I went on,” he said.

“I was also feeling a little bit less intimidated by the idea of going up to strangers and asking them questions. But then the more I did it, the more comfortable I was and realized that they’re just as curious about you as you are about them. So that became pretty natural a few weeks into the project.”

Among the adventures featured in the series: The duo explored the drainage tunnel system underneath Kiev, Ukraine, to find abandoned nuclear bunkers from the Cold War era and experienced a turtle rodeo in Papua New Guinea.

“We were chasing these sea turtles on a small boat. Once they get tired out, you can jump right onto their back and pull them out of the water. We were doing it so that we could tag them for science, but it was also something that I didn’t know was possible,” said Mack Woodrfuff, who spent the last two years living in Sydney, Australia.

“So it was a really cool experience to be helping these marine biologists, but also having the time of your life while doing it.”

2020 TV premieres: Here’s when your favorite show returns, and your new addiction starts

As a photographer and a journalist, the duo often gravitate toward different things.

“I was drawn to the beautiful scenery or the cinematic light that was hitting people’s faces and taking portraits of things and people; he was more interested in getting information from people and trying to find out what their stories are, who they are, where they’re from, what they do, why they do it,” said Mack Woodruff, whose photography and video clips have made it into the series. “I think we compromised a little bit.”

For Bob Woodruff, 59, curiosity about the world is what led to his journalism career.

After obtaining a law degree from the University of Michigan, Woodruff said he was fascinated by the changes taking place in China in the late 80s. He moved to China in the first year of his marriage to study Mandarin and teach law in Beijing.

CBS News hired him as an on-screen interpreter during the Tiananmen Square protests of 1989. Woodruff was 30 years old; it was the start of his career as a journalist. Since 2015, he has been ABC’s primary correspondent throughout Asia.

He said having the chance to bond with his son was one of the highlights of doing the Nat Geo series.

“Parents have a chance to spend a lot of time with their kids until they reach adolescence and then they kind of disappear for a long period of time,” Bob Woodruff said. “And then they come back and they’re not living with you anymore and you have great Thanksgiving dinners, but you don’t get a chance to go and spend four straight months with your child again, to be at the center of your life. So it was amazing.”

While both father and son had a hard time picking their favorite out of the six countries, Pakistan seems to have clearly made a special impression.

“My dad spent a lot of time there after 9/11. And so, a lot of the news that he reported from that country was about a place that was harboring terrorists, Taliban and such,” said Mack. “So I expected a somewhat dangerous place. What I saw was pretty much the opposite. It was incredibly generous people with incredible food and the most stunning, jagged mountains I’ve ever seen in my entire life.”

Bindi Irwin Found A Pile Of Moths In Her Laundry

Divorce life has been ‘a dumpster’

[Here’s how you can get the coronavirus vaccine in NYC.] Declaring that New York urgently needs to revive its arts

How to Reimagine Your Relationship to Alcohol

What’s on TV This Week: ‘Salt-N-Pepa’ and ‘Painting With John’

How to Pretend You’re in Tunis Tonight

Feeling Nostalgic for Your Grandmother’s China?

5 shows you should watch next from ‘Sanditon’ to ‘Jack’

What to Do Labor Day Weekend

‘WandaVision’ Review: That’s Why They Became the Disney+ Bunch

Elliot Page thanks fans for support after coming out as transgender

Elliot Page is thanking fans for the “greatest gift” — their emotion…

“Jeopardy!” revealed a new lineup of guest hosts to fill the void le…